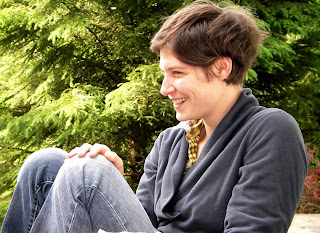 NWR: Which living poets have had great bearing on your poetry and how?

Elyse Fenton: I have trouble with this question, in part because the poets who have had significant ‘bearing’ on my poetry are not necessarily my favourite poets. And the poets who have had the most bearing on my poetry are no longer alive. So, poets whose work I’ve read and been affected by in loose chronological order include: Gary Snyder, Louise Glück, Marie Howe, Seamus Heaney, Adrienne Rich, Yehuda Amichai, Robert Hass, Yusef Komunyaaka, Carolyn Forché, Bruce Weigl, CS Giscombe, Mei Mei Bersenbrugge, Brenda Hillman, Gary Young, Natasha Trethewey, CD Wright, Michael Longley, Dean Young, DA Powell, Terrance Hays, Kevin Prufer, Thomas Heise, Katie Ford, Matt Rader, and recently, Major Jackson, Beth Bachmann and Shane McCrae.

NWR: In a recent radio interview the reporter spoke of your collection Clamor winner of the 2010 Dylan Thomas prize, as ‘inspired by the poet’s husband’s experiences as a soldier in Iraq’. But of course it’s not directly about his experience but rather about your experience of his. The poetry seems to spring from that emotional tension and distance. But your husband spoke about how his active duty as an army medic was, in the day-to-day sense, quite mundane. Do you think there is cause for his concern that your poetry might be mis-understood by general audiences as a straight depiction of his life there? (That is if the radio editing was a fair presentation of your views!) How do you reflect on how the book has been read?

EF: This is a subject that radio interviewers have seized on recently, and, yes, over-dramatized a bit for the sake of a good human-interest story. Any heated controversy it may have sparked has been more present in the blogosphere than in any personal relationships.

In terms of how this book gets read, I think among most poetry readers (ie poets), there’s the understanding that poetry is not a form of journalism, that the speaker is mostly a construction, that a poem’s ‘truth’ might be removed from an objective, originating truth. A poem happens on the page, or in a reader’s interaction with the page, so who cares what the flesh-and-blood poet’s husband did or didn’t do? Or that she has a husband, for that matter?

The cause for concern, as you put it, comes when a reader wants to read a poem as having some dutiful obligation to an objective set of facts. According to this reading, there is some value assigned to the ‘authenticity’ of a voice. I’ve had audience members ask if my husband did, indeed, once catheterize an Iraqi soldier. What becomes troubling to me in this reading is the privileging of that authentic voice, which has the effect of silencing all other voices deemed ‘inauthentic’. Because what does it take to be ‘authentic’? To be dead? The lone survivor of a firefight? The witness of a firefight from a distance? To love a survivor? To love a witness to a survivor? Who is to say that the experience of one soldier is any more authentic than another? Or that a civilian cannot write authentically about a country at war? Once we start playing the authenticity game, we’re sunk. We’re silenced.

And yet, it’s more complicated than that. Because, as it turns out, I can’t escape the authenticity game myself. When an amateur blogger recently wrote that I should not call myself a “war bride”, because, he presumed, my husband had never been in “real danger”, I bristled. I drafted a response in my head outlining all the reasons he was wrong (and laughably ignorant) before I caught myself. I’d put the book out in the world — happily! —and who was I to begrudge a reader this interpretation, ignorant and tone-deaf as it was? Why did I have to parade out my husband’s experiences — or my own — as a kind of credential? And why did I feel so desperate to set the record straight, if I really believed that a poem’s truth has no strict fidelity to the objective truth?

And right now, that’s the crux. As it turns out, being a poet and being human are not mutually exclusive propositions.

NWR: In your latest poems, including one published in NWR 92, the summer issue, you write about new motherhood in a way that is both loving and also original, wild and surprising. Clamor is about love, war and death. You’re happy and accomplished at writing about big human themes. But do you think that poetry should always deal with big questions? Or is there a place for the silly, trivial or humorous?

EF: I don’t think there’s any particular should for poetry. Yes, absolutely, there’s a place at the poetry table for humour, just as there’s a place for the ‘big questions.’ And I think more often than not, they’re rubbing shoulders, or should be. If I’m not turning to humour, it’s because I find it incredibly difficult to do well.

In the past few years, I’ve wanted to move away from the breathlessness and relatively narrow language of Clamor, so I’ve been working on play and recklessness, trying to explode or at least expand my register a little. But – surprise! – there’s distance and longing and terror and the potential for loss even — or especially —in poems that attempt levity. Because what’s laughter without the potential for ruin? And vice versa?

NWR: There’s a strong narrative and thematic arc to the poems in Clamor. Were there poems that didn’t fit that story: that you held back from that collection to publish later, or were the war and the love so all-engrossing that it was all you wrote about at that time?

EF: Once I started writing the poems in Clamor, I was pretty much riding it until the end.

NWR: You’ve won prizes for your work on both sides of the Atlantic, which is unusual for a young poet. What do you think about the occasionally insular stance of American poets? Did you find the Dylan Thomas Prize, which you won in autumn 2010, a good way to discover literary worlds over the pond?

EF: In my experience, yep, American poetry can be pretty insular. This is not to say there isn’t a healthy translation community alive and kicking, just that there are enough American writers jostling shoulders (most often in mutually beneficial and productive ways) that it’s hard to expand the scope. I mean, I have a friend who’s a Canadian poet, and we hardly even speak the same language. Maybe I exaggerate. Matt Rader — he’s a terrific poet — introduced me to Michael Longley, whom I may never have encountered otherwise.

Also, I’ll be at the Hay Festival this June, and am hoping to have my American poetry insularity blown to pieces. Feel free to interpret this as a challenge.

NWR: Meryl Streep endorsed the popular anthology Being Alive, and Catherine Zeta Jones said how happy she was that a poet won the 2011 Dylan Thomas Prize. How surreal was the moment of meeting CZJ and Michael Douglas? Do you think that Hollywood has a secret love of poetry?

EF: Oprah magazine or somesuch recently did a fashion spread on Emerging Poets. Seriously. If that’s an indicator of Hollywood’s secret love of poetry, I’d say we won’t see a poet in Hollywood for a very long time.

NWR: Do you think you will return to the subject of war?

EF: But is war a subject? I guess it is, inasmuch as ‘love’ is a subject. Of course, there were years in my life when it wasn’t a subject but a shadow. So I guess it feels like a privilege to be able to think of war as a subject, as something you choose to return to.

NWR: Your poems are full of images of the natural world and some have a riddle-like quality with their use of kenning and self-description. Are your poems informed by these or older poetic traditions?

EF: I think it’s hard to be an American poet and not be a product of some American landscape — urban, rural, suburban, sub-rural, Brooklyn.… We have so mythologized (or de-mythologized) our landscapes beginning with the Transcendentalist, that the natural world’s gotta show up in some way. I read a lot of Gary Snyder and Ken Kesey and Beat poets as a teenager on the East coast, and then moved West, pretty much for good. As for the riddle-like quality, well, I probably owe that to a combination of Lorine Niedecker and Michael Longley.

NWR: Where is home? And where is away?

EF: Right here. And there.